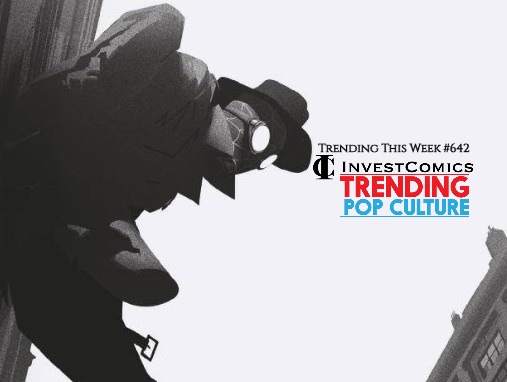 InvestComics/Trending Pop Culture; SINCE 2005.
Here are this week’s top Trending Comics and Best Cover Art headed your way this Wednesday 8-26-20
Click on the RED links, Images or the comic cover to buy/bid from All available sellers on Ebay
Please note: New comic book releases and all items are subject to change

Batman The Three Jokers #1 – The highly anticipated 3 Jokers finally arrives as DC touts that their sales for this comic are through the roof. With superstar writer Geoff Johns at the helm, along with fan-favorite artist Jason Fabok, DC promises to take readers down a Batman path never visited before. We’ve all heard this before, haven’t we? But we’ve never had three Jokers from three era’s prancing around a Batman story, so there’s that. The comparison, as far as its importance in the DCU, is correlated to The Killing Joke. That’s quite the shoes to fill. Look for a bunch of variants to accompany the release at your local comic shop or on eBay. 23 at last count. Be sure to read the InvestComics Speculation Training article; Speculating Variants before spending too much on a variant you think may have some upside to it.
Staying on the topic about the upside of investments, we never thought we’d have to report on the trends of second, third, fourth, or any prints after the first as a comic to possibly flip, but here we are. Recent sales of any second print Thor comic containing the name Donny Cates in it have skyrocketed in the interest of speculators. More so with the first appearance of Knull and his second prints. The absurdity in the pricing for these comics is baffling, to say the least. These are not investments, these are the Black Friday hype specials that make you believe you need that TV, but in reality, you don’t. Makes you want to buy lots of toilet paper during a pandemic when in actuality you have plenty. And just like that, on Sunday, you realize that Black Friday TV wasn’t that important to have or a shipment of toilet paper arrived in a few days. The same with these overpriced comics that are hyped by speculator websites or some on video touting it’s a hot comic. Nine out of ten times they’re not. Do you know how we can say this? The prices of Negan #1 red foil cover, the first Punchline, the first Robin King, The first Virus, the first Black Winter, and on and on we can go, but all of these comics have either come down significantly, slowing down, coming down, or interest has waned altogether. The arrival this Wednesday of Thor #2 (4th Printing) and Strange Academy #1 (3rd Printing) will probably, most likely be touted as rare and HTF, just to drum up the hype, it keeps the speculation machine going. Regular readers of this site know we’ve addressed the words/acronym rare, scarce, and HTF. To sum our thoughts upon this, every single new comic release will have fewer copies available in today’s comic market climate. Do not succumb to the hype.
Fantastic Four Antithesis #1 – Comic legend Neal Adams will pencil his first Fantastic Four story ever. He’ll be paired along with legend writer Mark Waid. This has must read all over it. This series will probably introduce a new villain as well, so something for everyone!
Canto II The Hollow Men #1 – IDW’s hit Canto series gets another number one issue. This time with a TMNT homage cover. Writer David M. Booher and artist Drew Zucker.

Spawn #309 – Although it seems like Gunslinger Spawn is being depicted as a new character in the new Spawn issue, he’s not. Back in 2008 a two-part story in Spawn #174 and Spawn #175 introduced Gunslinger Spawn. A 9.8 graded #174 sits at a buy it now price of $400 and a 9.8 #175 sits at a $435 buy it now. $835 for these two comics. Why is that exactly?
Bomb Queen Trump Card #1 – In a political landscape as crazy as it is these days, there have been multiple indie publishers taking stabs at it. Most satires regarding trump have fared well in the sales department. Now, one of the biggest Indie publishers, Image Comics, is throwing their hat into the political ring with this release from creator Jimmie Robinson, who incidentally was the original creator of the Bomb Queen character in 2006’s Bomb Queen #1. A VF/NM copy sold a last month for about $25. Not bad for a supposed HTF comic. Some collectors also claim that Savage Dragon #134 is also Bomb Queens’s first appearance. This is either a same-day release (pick the nicer cover to be the first), a cameo thingy vs. 1st appearance, or just nonsense. So, to cover yourself on BQ’s first, get both. The more “main-stream” indie, Image Comics, may cause more of a buzz because it’s a trump related comic. We shall see.
Teen Titans Vol 6 Annual #2 – DC Comics says a must-read/see confrontation between Batman and Robin.

Sacred Six #2 – Dynamite Entertainment struck a good nerve with comic collectors as sales are evident every day on eBay sales since the first issue. So, it looks like a hit could be in the making here. A fantastic creative team consisting of Christopher Priest, Gabriel Ibarra, and Jae Lee are helping matters.
Batgirl #48 – The Last Joke part one from writer Cecil Castellucci and artist Robbi Rodriguez.
Empyre Captain America #3 – Is that mountain or rock thing making its first appearance? Crazy times call for crazy questions.
Daredevil Annual #1 – Daredevil in his sixth number one annual. This story is named One More Day. Hey! Wasn’t that a big Spider-Man storyline?
Mega Man Fully Charged #1 – A new series from Boom Studios. Creators A.J. Marchisello, Marcus Rineheart, and Stefano Simeone.