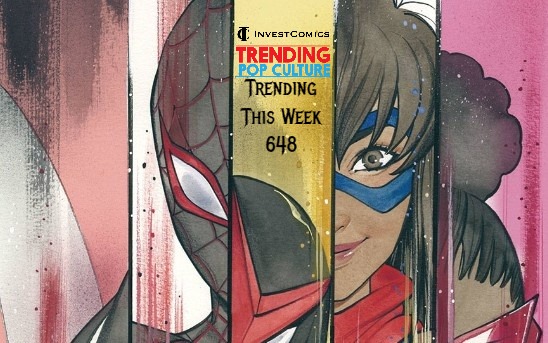 InvestComics/Trending Pop Culture; SINCE 2005.
Here are this week’s top Trending Comics, Best Cover Art, and Trending Collectibles headed your way this Wednesday 10-7-20
Click on the RED links, Images, or the comic cover to buy/bid from All available sellers on eBay
Please note: New comic book releases and all items are subject to change.

The Amazing Spider-Man #49 – This is the 850th Amazing Spider-Man issue. This means two things. One, the Green Goblin makes his long-awaited return, and two, there are a bunch of variant covers.
Batman #100 – A few things to cover here. Batman will don a new costume (that the Joker will somehow eventually wear?). There is a variant cover with Bruce showing off his new, shiny costume. A villain introduced last week will face off against Batman for the first time. His name is Clownhunter. Speaking of villains, this 100th issue debuts a new villain named Ghost-Maker. The debut of the new villain will be the driving force behind this comic. However, if the costume is possibly worn by the Joker in a later issue, as rumored, how this happens is anyone’s guess, but the Joker donning a Batman costume poses more questions than not. Maybe the Joker becomes a new Batman? If so, here’s the debut of his costume.
American Vampire 1976 #1 – Ten years ago, writer Scott Synder and artist Rafael Albuquerque teamed up to bring comic fans the first part of this story in American Vampire. They are back with a nine-issue series to close it out.
Thor #8 – Fan favorite Donny Cates is still writing, Galactus was killed in the last issue, Thanos possesses Mjolnir. The hottest comic series in the industry continues.

Champions Vol 4 #1 – New series from writer Eve Ewing and artist Simone Di Meo. Why not just make this a regular series instead of cranking out a new number one issue every so often?
X-Force #13 – We gave you a heads up about these Marvel Fortnite variant covers last week. Here we are again this week, a banana dude on this variant. What if one of these Fortnite characters gets their own book or show up within the Marvel Universe. If one of them does, these covers will be way overpriced in the aftermarket. This banana dude will be back.
The Rise Of Ultraman #2 – Get the early issues of Ultraman before some internet guru needs to dump their copies and makes this character a bigger deal than it is. Yes, the character has upside, but not for the wrong reasons. Be mindful of what anyone’s agenda is to push a comic.
Spider-Man Marvels Snapshots #1 – Legend creator Howard Chaykin debuts a Spider-Man comic that he’ll write and draw. Any true comic fan will jump on this. This will be a special book.
American Ronin #1 – If comic book covers sell books, this Mike Deodato Jr book will be a sell-out. Okay, two more reasons why this comic will sell out. A new series from writer Peter Milligan and artist Aco. From AWA publishing.