IMAGE COMICS’ THE VAULT #2 SELLS OUT
Following on the heels of the sold out debut issue, Double G Marketing proudly announces that THE VAULT #2, written by Sam Sarkar (Caliber: First Canon of Justice), illustrated by Garrie Gastonny (Warren Ellis’ Supergod), edited by Dave Elliott (current EIC at Benaroya Publishing) and published through Image Comics has sold out at the distributor level.

THE VAULT, recently optioned for a feature film adaptation from Johnny Depp’s Infinitum Nihil and Graham King’s GK Films, is about a small team of treasure hunters, struggling to excavate a dangerous and legendary treasure pit before a massive storm hits Sable Island, the “Graveyard of the North Atlantic.” Equipped with all the latest technology, the scientists believe they are prepared against all of nature’s fury, but nothing can prepare them for what they are about to unleash.

Sam Sarkar, when informed of the news, stated, “Once again, I’m very grateful to the retailers for ordering it and the readers for picking it up.  Even though there is only one issue left in the series, this is not the end.  It is only the BEGINNING of the end.  Hopefully, it’ll take a long time and a lot of great reading to get there.  My thanks to Garrie Gastonny for the amazing realization of THE VAULT and to Sakti Yuwono and Bagus Hutomo as well. Gianluca Glazer is a rockstar for getting the word out and of course, it would never have happened at all without my editor and good fiend, Dave Elliott. And yes, I called him a fiend.”

Critics who’ve read THE VAULT had this to say:

“You don’t want to miss out on this deep-sea adventure!” – Fangoria

“This is turning out to be a great story.” – My Comic Network

“The Vault is a must read on my list so make it a part of yours… NOW!” – From the Tomb Magazine

“What a gem of a book! I can totally recommend The Vault. Get it now.” – Weekly Comic Book Review

“I could see it being a sleeper hit of the year and would recommend checking it out.” – Comic Book Realm

“If you’re keen on action comics and sunken treasure, you are going to like this comic.” – Sequential Tart


Fans still looking to pick up a copy of THE VAULT #2 may contact their local comic shop (www.comicshoplocator.com) for availability or purchase the digital edition from Comixology (www.comixology.com) on September 14th, 2011. 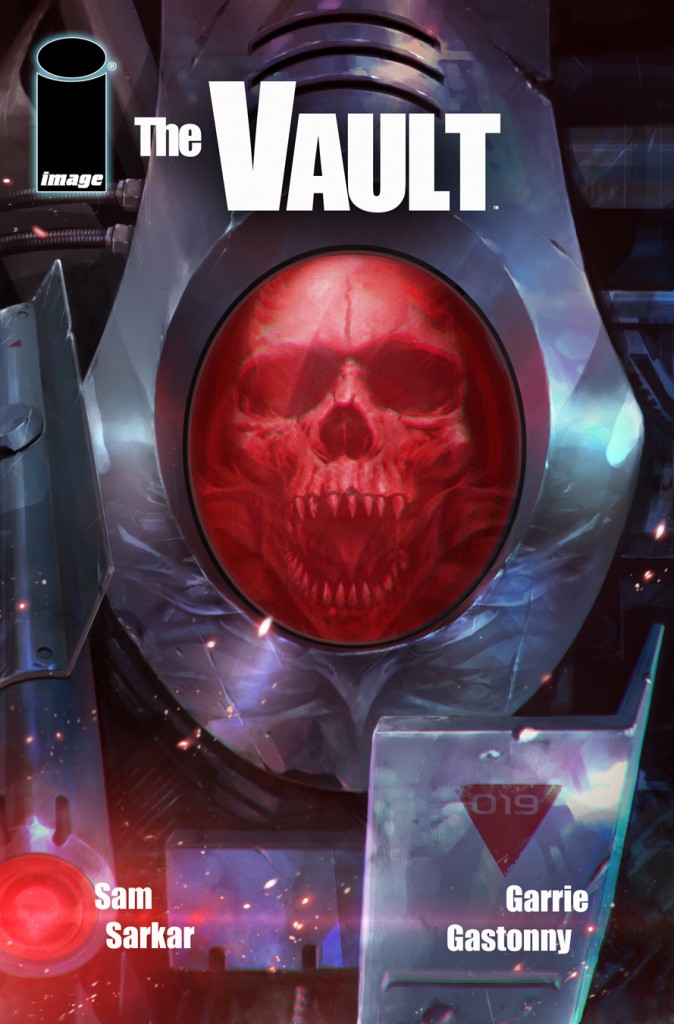 ABOUT SAM SARKAR
Born in Halifax, Nova Scotia, Sam Sarkar is a 23-year veteran of the entertainment industry. He began his career as an actor and was one of the leads on the long-running, syndicated television series Neon Rider. Following the series, Sam decided to pursue writing and worked for the hit television series Beverly Hills 90210. Stemming from his work on the show, he also co-wrote a television pilot for Spelling Entertainment under the direct guidance of TV legend Aaron Spelling. Deciding then to embark on feature films, Sam took some chances, following a varied path of writing screenplays and working as a sound technician. In 2004, after working on several films with actor Johnny Depp, Sam was asked to help run Depp’s production company, Infinitum Nihil, headed by Christi Dembrowski. As Senior VP at the company, he continues to serve the varied needs of Hollywood as an executive, producer and writer.

ABOUT GARRIE GASTONNY
Having worked as a comic book artist and illustration lecturer, Garrie Gastonny now mainly focuses on illustration to avoid getting beaten up. Garrie also serves as Senior Artist at Imaginary Friends Studios. His credits include Warren Ellis’ Supergod, Caliber: First Canon of Justice and Lady Death. For more information about the artist, please visit http://thegerjoos.deviantart.com/.

ABOUT DAVE ELLIOTT
Dave Elliott has more than 25 years of experience working in every aspect of the comic book industry from writer and artist to editor and publisher.  He has worked on diverse titles such as A1, Deadline, Heavy Metal, Penthouse Comix, 2000 AD, Justice League of America, Transformers, GI Joe and Doctor Who.

In 2006, Dave co-founded Radical Studios.  As both the co-publisher and Editor-In-Chief, Dave was integral to the development and launch of Radical’s premiere comic book titles, which included Hercules, Caliber (created by Sam Sarkar of The Vault), Freedom Formula, City of Dust (created by Steve Niles of 30 Days of Night), Hotwire (created by Steve Pugh) and Lords of Misrule, as well as a complete re-imagining of Aladdin, which was conceived by Dave.  The success of these titles led to Radical winning the Diamond Comic Distributor’s Gem Award for New Comic Book Publisher of the Year in 2009. Currently, Dave serves as Editor-In-Chief of Benaroya Publishing, a subsidiary of Benaroya Pictures, with titles Red Spike, Samurai’s Blood and Marksmen released under the Image Comics brand. Additionally, Dave Elliott has worked with the band Fall Out Boy for Image Comics’ Fall Out Toy Works as well as with Nascar/MMI to create and brand new IP, which he sites as examples of new media integration for a more immersive entertainment experience.