The Hot picks for this week focus on a Marvel character that has been around for a while. This hero will have his day in the sun as Marvel sets up for his comeback. Looking to make ‘Jimbo’ a major player, Marvel had recently announced at the San Diego Comic Con that he will be getting his own ongoing series. This week Jim Rhodes makes his return setting up for the solo series. Find out where it all began…..

A small week for Hot Picks. Never fret, there is always next week!

Let’s get started with Iron Man………

Iron Man # 33  War Machine will have his own ongoing series in the not so distant future and his comeback starts right here! If you hop on the time machine back to 1983 you’d find Iron Man # 169, which would be Jim Rhodes first appearance. Now fast forward 10 years later to 1993 and find Iron Man #291, which would be the first issue for War Machine on his own. These issues are very affordable right now and should be picked up before that solo series hits. It should also be noted that when Robert Downey Jr. gets bored of being Iron Man, look for Hollywood to look at Terrance Howard as War Machine to take flight in theaters as a solo movie. Pick up the first appearances and hold on to these comics for a while; you’ll be glad you did.

Squadron Supreme 2 # 3  Arachnophilia makes her comic debut right here. That’s a great Greg Horn cover huh?! The thing that makes this debut something to watch is that she has the powers of a spider of some sort. Any hero, (hero?) that possesses a type of spider power has always ‘usually’ turned out to be a mild success. Even though it might have taken YEARS to do so but, Spider-Woman is successful, Spider-Girl has a following and Spider-Man has potential, no? I guess we might have to wait a little bit to see how this new character plays out. You never know, this could be an instant successful character, or maybe it’ll take 20 years for comic fans to be interested. Tough call here, buy it, read it, let US know…….

Mighty Avengers # 18  Another debut for Marvel this week. This time a team debuts, Nick Fury’s Secret Warriors. Not too keen on the name. Sounds like something that has been done before. Just like the Squadron comic, not too sure this debut will be much…..right now. It’s a Secret Invasion tie in, which makes this a must have for SI readers. Nick Fury as of late has been kicking butt and taking names, maybe Nick Fury’s Secret Warriors will do the same in the investment column. Big maybe……… 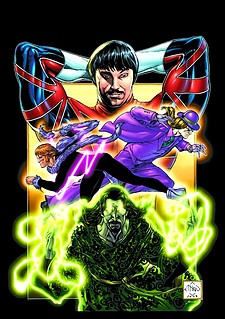 Greatest Hits # 1  A new team emerges from DC’s Vertigo imprint. They’re from England, they’re a rock band and they have super powers. No it’s not the Beatles. And a Variant cover by Ethan Van Sciver. Looks interesting.