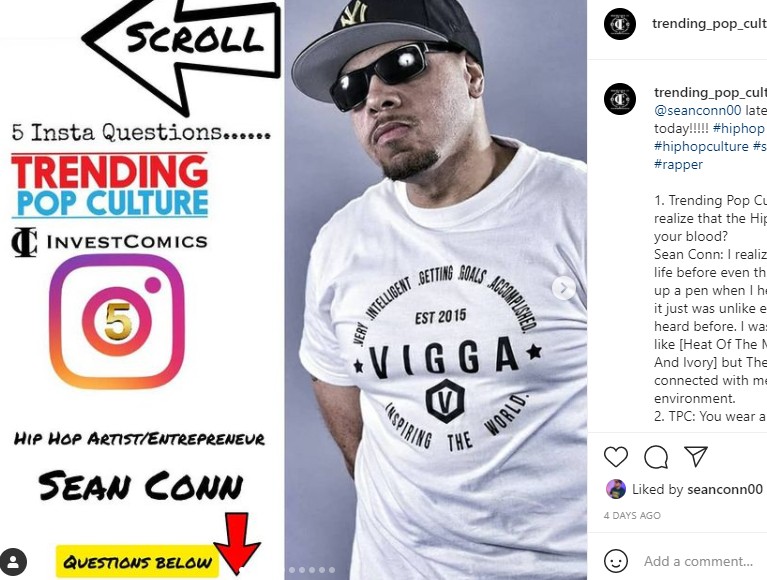 1. Trending Pop Culture: When did you realize that the Hip Hop game was in your blood?
Sean Conn: I realized it very early on in life before even thinking about picking up a pen when I heard (The Message) it just was unlike everything I ever heard before. I was accustom to songs like [Heat Of The Moment] & [Ebony And Ivory] but The message connected with me and my environment.

2. TPC: You wear a lot of comic book gear throughout your music videos and pictures. Are you a comic book fan?
SC: Yes indeed I am even before Hip Hop I was introduced to comic books as far as I can remember, my older brother collected them and then I began to by them with him. He made me buy DC only and he would buy marvel. If I dare buy a marvel comic he would beat me up lol but in the grand scheme of things It was ingenious because we both acquired a vast collection.

4. TPC: By deign, do you write your lyrics relevant to life in the big city? NYC.
SC: No, I base my lyrics off of life experiences in general and being I’m from the big city it’s embedded in my DNA but I seem to flow off my creativity and imagination. I let the music determine the vibes. But I do write without music as well when inspiration hits me.

5. TPC: You have a new album dropping, tell us about it.
SC: Yes it’s actually an EP 7 songs titled (Conn And The Genius) this is definitely a new sound for me, unlike my last LP (The Man With The Golden Mic) that was traditional golden age sound this project is sonically different with more of today’s sound while I still remain myself with a new energy. I have to thank my TRIBORO brother Elus aka The Kindgenius and producer of this entire project, he convinced me to try something different that I initially was against like “Autotune? Na I’m good” but thank goodness I trusted him because my single Vigga Vibez is my the biggest record of my career! With over 100k steams and I set the goal of it being a double platinum single