The first ever InvestComics Publications comic book ever; The Dawning #1 have arrived! Look for more information coming very soon!! 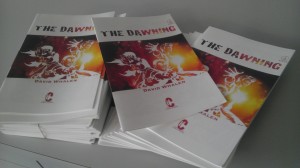 DC Comic fans are showing a tremendous outpouring of support regarding their 3D covers. The slick covers have taken the comic shops and the collectors market by storm. The trend continues this week for DC Comics as well as InvestComics. For the past couple of weeks InvestComics has detailed each 3D villain cover with the first appearance of that character. However, the villain pool seems to be thinning out just a bit with some of these adversaries. Perfect time to get that rare breakout book isn’t it? Do not miss any of these comics, there is a potential sleeper(s) hidden amongst the crowd this week. Buckle in; it’s been a fun ride so far as we anticipate more aftermarket greatness! And as always some fantastic reads!

Wonder Woman (2011 4th Series) #23.1 – Probably one of the weakest villain books of all this week with Cheetah clawing her way into the life of our favorite Amazonian. Cheetah made here first appearance back in 1943’s Wonder Woman #6. Look at that cover! Now look at the current cover. Yes time has been treating Cheetah nicely. Aged well.

Teen Titans (2011 4th Series) #23.2 – Here we have one of those villains on the cusp of a huge breakout. Already appearing on the hit television show Arrow, Deathstroke will have to make it to the big screen if DC/Warner Bros ever get their comics to film in order. Why would he “have to” make it to the big screen you may ask? Because he’s beloved by comic fans alike, he’s a total bad as*, and he would translate beautifully to the big screen. If you are in the market for a comic that has tremendous upside potential, look no further than The New Teen Titans #2 (1980). Already a high valued comic, it has more room to uptick. The debut of Deathstroke is brought to you by the team of George Perez and Marv Wolfman. What are you waiting for? Go get this comic.

Detective Comics (2011 2nd Series) #23.3 – There were rumors a while back that the Scarecrow was to appear in the next Batman flick. If this occurs, it will mean an already nice payday for the owners of World’s Finest Comics #3 (1941) – first appearance of Scarecrow. Here’s a funny fact. Did you know that back in the day that shock jock Howard Stern turned down the part of the Scarecrow? That would have been something huh?

Flash (2011) #23.3 – The Rogues are an important group because when, not if, when the Flash movie finally makes it to your local theater, this group should be considered as the villains for the film. Yes too much for a first film, but what about the sequel? Yes a big stretch here, but the glass is always half full here at InvestComics! Check out their debut in Flash #130 (1962).

Justice League Dark (2011) #23.2 – A weak showing with Eclipso at the forefront here. Fantastic 3D cover though! House of Secrets #61 (1963) houses the first appearance of Eclipso.

That covers your 3D fix for this week. Now onto the Hot Picks!

DC’s hit series Arrow will bring a television character to “life” in the comic books for the first time. Check out Arrow (2012 DC) #11 for the debut of Roy Harper!

Marvel Comics will bring back the Jester in Daredevil (2011 3rd Series) #31, a long time nuisance for our beloved Daredevil. The Jester debut in Daredevil #42 (1968) written by some guy named Stan Lee. Another return this week from Marvel happens in Thor God of Thunder (2012) #13. Unless you have been living under a rock for the past year, the name Malekith the Accursed should ring a bell. He will be in the new Thor movie coming out this November. Most are probably aware by now too that Thor #344 holds the first appearance of this villain. If you have this comic, be sure to dump it very soon, prices will be coming down very quick once the hype wears off. Malekith is a onetime deal here. He probably will not be showing up in any other Marvel film after this one. Also from Marvel this week, Superior Carnage (2013) #3 will debut of the all new Carnage! This one will fly off the shelf, grab a copy.

Two number one comics are sold out at Diamond this week. Get your hands on these if you can. Zero (2013 Image) #1 will be seeing second printings very shortly, a huge interest in this book. Also Transformers Regeneration One (2012 IDW) #0 is sold out! Maybe a short print run here? Who knows, but IDW seems to have struck a chord with the Transformers base.

Two Dark Horse number one comics to check out this week are Kiss Me Satan (2013) #1 and Buzzkill #1.