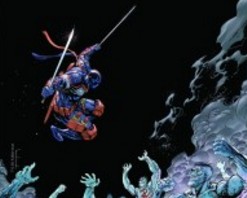 IC 100 Club Pick: Black Panther #1 (1977) 8.5. Here’s a beauty waiting to be bought for only $100.00. His first solo comic. Black Panther still has upside. His new comic coming out, a yet to be seen appearance in Cap’s Civil War movie, and a solo movie. Yes more upside for a character that hasn’t even hit its stride yet in film and the new comic book is getting all kinds of hype too. Black Panther is and will be the real deal.

Have you seen the latest InvestComics Creator Spotlight checklist that came out yesterday? Creator JOCK! Click HERE to check that out now!

Fanboys, please do not email us or make fanboy comments on our social media or here. If you’re a fanboy, discontinue reading please. If you’ve ever had a heated debate/fight/argument/cried (as an adult) over who is stronger Hulk or Superman or anything similar resembling a deep love of a comic character and know nothing about business, then please skip the opening here.

Have you’ve seen the new Deadpool movie? Well if haven’t, you probably have seen the aftermarket going bonkers after its release. New Mutants #87 (first full appearance of Cable) is quickly becoming the NEW New Mutants #98. This isn’t a bad thing if you’re on the side of the seller. If you’re a buyer, well you’re going to have to pay a severe premium in order to get your hands on the Cable book if you want it. Here’s the thing, and we’ve said it time and time again within the blogs of the InvestComics website. The New Mutants #98 comic is overpriced and so is (will be) New Mutants #87. The absurdity in pricing for these comics is almost comical actually.
Here are some quick numbers. Let us remind you here, CBCS does not have a census. Which means these numbers are probably much higher. These are CGC numbers…..
There are a total of 1000 New Mutants #87 graded at 9.8. 1087 graded at 9.6. A total of 3804 graded so far. That’s currently, that number will climb steadily and remember, this does not include CBCS. New Mutants #98; 2307 graded at 9.8, 2806 graded at 9.6 and a total of 9514 total graded. Probably over 10,000 graded counting CBCS.
Doctor Strange #169 (1968) 30 graded at 9.8, 70 graded at 9.6 and a total of 1063 graded. How is it that New Mutants #98 is rivaling this comic? Now all the fanboys got their panties in a bunch. Relax. We understand it’s a popularity contest right now, but here is some truth that the other wannbe InvestComics sites will not tell you. The Doctor Strange book is by far and away a better sound investment. Instead of spending $400/$500 on a first appearance on a comic(s) that are well documented as to having many copies available, use your business tactics and understand that supply and demand will eventually equate into the equation here and you will lose if you hold onto your comic a bit too long. It’s inevitable, you will lose money on New Mutants #87 and #98 because you refused to let it go. Anyone spending large amounts of money to have these comics in their possession, better have a plan to sell at an opportune time or else you will be in the red. Just in case you haven’t notice, we’ll say it, the comic book market has been and continues to see a massive correction. Especially the moderns. That first appearance of Spider-Gwen (variant) that InvestComics advised AGAINST buying at ridiculous prices is more than $300/$400/$500 below its asking price from more than a year ago. InvestComics warned our fans, while the other fanboy sites encouraged the buying frenzy. We’re here to spill truth and guide you, not help you lose money. Do not give into the hype of a comic or comics that saw prints of upwards to 225k a piece (New Mutants #98 and a bit less for New Mutants #87). That’s a quarter of a million copies of ONE comic book. What does this mean actually? Well it means there are several dealers and collectors that are sitting on long boxes full of Deadpool and Cable first appearance comic books. Can we say the same for a classic comic like Doctor Strange #169? No we cannot. Not hating on the first Deadpool or Cable here, but use common sense when spending that hard earned money. Realize that these two particular comics have a ceiling AND more importantly a ground floor. If you’re a buyer at a premium for ANY 90’s (*ahem* Doomsday *ahem* Apocalypse) or modern book), you have to know when to dump it or when the correction in the market does in FACT happen, you’ll be in the red and you’ll never make that money back. We’ve said this before, we’ll say it again. the real money is in Bronze/Silver/Golden. And one more thing. About Doomsday and Apocalypse, most likely one trick ponies. We’ll see them once and they’ll fade into obscurity never to be seen again on the big screen, thus driving that premium price back to the correct area.

Now back to our regularly scheduled program…….

And the award for longest title of the week goes to…….Hellboy and the BPRD 1953 Beyond The Fences #1! With this award the readers will get Writers Mike Mignola and Chris Roberson along with artist’s Paolo Rivera and Joe Rivera. Hellboy: Year Two. Yep, we’re in.

Maybe DC Comics received a special bundle price for the amount of Neal Adams variant covers we’re getting this month. Here are the covers this week from the legend himself; Flash #49, Deathstroke #15 (the Tyler Kirkman regular cover kills), Aquaman #49, Superman Lois And Clark #5, We Are Robin #9, Teen Titans #17, Cyborg #8, Grayson #17, and Superman #49.
And for the second week in a row, a Neal Adams Superman Wonder Woman variant comic is sold out. Check out Superman Wonder Woman #26 as Korean artist extraordinaire Kim Jung Gi pencils his second issue with the big three (Supes, WW, and Bats). We informed our fans last week about Kim Jung Gi. This guy is the real deal. Kim actually does the cover art for one of these variants (pictured here).
The real reason we have Neal Adams overload this month is because Superman The Coming Of The Supermen #1 will be coming out. Neal Adams will be the writer/artist here for the six issue mini-series. Fans are looking forward to a boldly told story and art from Neal. He will not disappoint here.

After a slight blip, Batman Dark Knight III The Master Race #3 will be back on schedule. And with it, as usual, a ridiculous amount of variant covers. All the covers are nice, nothing so riveting that you’ll need to pluck down a months worth of allowance for, but the Midtown Comics Greg Capullo cover is cool (pictured here).

Crazy eye candy from cover from Lee Bermejo coming this Wednesday. Check out We Are Robin #9. And more of the same from Michael Cho’s Daredevil #4 (Vol 5).

IDW pits two unlikely franchises together for the first time ever, Street Fighter X and GI Joe. Yep, fun for all! A whole bunch of nutty variants will be available. The Matt Waite pixel cover is good, but our fav is the Paolo Villanelli cover.

Comic fans will be introduced to an all new mutant on new comic book day. Check out the introduction of Bailey Hoskins in X-Men Worst X-Man Ever #1. Definitely a comic to pay attention to.
Marvel warns fans about the last page in All New All Different Avengers #6. Don’t go to your shop and open to the last page now! It’s not a library you know! Hahaha!

With the press coverage Faith #1 received, it now comes time to see how the follow up issue does. Faith #2 comes out Wednesday with less fanfare, so let’s see how many fans stick with it after the first issue. Many will follow up regardless of the press push. It’s up to Faith and Valiant to keep them now.

Neal Adams variants below. Click on any of of the images to buy/bid from all available sellers on Ebay.