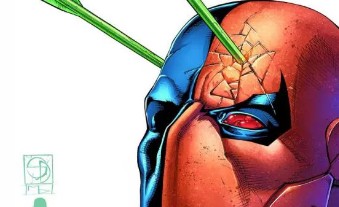 We are not responsible for comics not shipped on time and or changing of release dates regarding this article or any article on InvestComics. We report on the comics DUE out the coming week. We have NO control of release dates nor will we change our article to accommodate a change in shipping, release date or cancellation. We also use the phrase “sold out” in our articles on a regular basis. “Sold out” means at the distributor. We have no way of knowing if your local comic shop still has copies at their store on the shelf of a comic that is no longer available on the distributor level. Please use common sense here.

IC 100 Club Pick: Avengers #28 (1966) Graded 4.5. This Silver Age beauty is the first appearance of the Collector and Giant-Man becomes Goliath. With legends attached to this book named, Lee, Kirby, Heck, and Giacoia, it would make a great addition to your collection. At a price tag of (only) $79.99 with free shipping. An early Avengers comic, a first appearance and 4 legendary creators…..what is there not to love here?

The Superman American Alien series continues to impress. Check out Superman American Alien #5 coming out this week.
Martian Manhunter #10 will contain the origin of J’onn J’onzz.
Poison Ivy Cycle Of Life And Death #3 cover by Clay Mann. Kudos!
Legends of Tomorrow #1 will have 4 separate stories of various characters from various creators. Firestorm from Conway, Hunter and Pansica. Metamorpho by Lopresti and Banning. Sugar & Spike (all grown up!) from Giffen and Evely. Metal Men from Wein, Scott, and Yildiray. As you can see, some super talents in this book. Fans should be up for a great read!
Both covers, the regular and variant for the Green Arrow #50 issue this Wednesday are awesome. Shane Davis on the regular cover and Aaron Kuder on the Batman V Superman variant.
Astro City #33 will introduce Fix-It Man.

IDW’s 3 Devils #1 from creator Bo Hampton looks good. Bo handles writing and art duties. Also from IDW, Ghostbusters fans will be treated to a new story; Ghostbusters Deviations. Sticking with the franchise stamp, Star Trek #55 will be the first part of a four part story line; Legacy of Spock.
Legend Alex Ross delivers as he does so often on the new Lords of The Jungle #1 cover from Dynamite Entertainment.

Back to Ghostbusters for a sec. The Huck #5 (Image Comics) variant from Rafael Albuquerque will keep to his trend with movie variants. This time with Ghostbusters!
If you haven’t been keeping up with Monstress (Image Comics) from Marjorie Liu, well then you’ve been missing out. Catch Monstress #4 this week and go HERE for all available Monstress books on Ebay.

Infinty Entity #2 has Warlock running into the character In-Betweener. In-Betweener first appeared back in 1975’s Warlock #9. A Jim Starlin creation. Jim Starlin writes and draws that issue. Jim is also writing the Infinity Entity series.
InvestComics is still feeling the bull market with Deadpool And The Mercs For Money. Check out Deadpool And The Mercs For Money #2 and see why we feel this way. Good stuff happening here. All the first appearances of each group member right HERE.
A few things regarding the new All-New Inhumans #5 this week. First, there seems to be an introduction here, the Skyspears. Never heard of them, maybe you have? If not, this will be their first appearance. Second, a very cool Neal Adams variant! And lastly, a Spider-Man guest spot. An all around good comic here. Also good to know, the Marco D’Alfonso Sugar Hill Gang’s Rapper’s Delight Hip Hop cover is sold out.

International Iron Man #1 from Bendis and Maleev. It will be an interesting read because Michael usually takes us readers to places we’ve never gone. Lots of variants to choose from. We dig the Gabriele Dell Otto variant (sold out).
We love, love the regular cover to Scarlet Witch #4 from David Aja. Lovely.
Squadron Supreme #5 features a character being brought back from obscurity. Although featured in a few books late last year, he hasn’t appeared much of anywhere in his 41 year existence. Skull The Slayer makes an appearance this Wednesday. He first appeared in Skull The Slayer #1 in 1975. Written by Marv Wolfman and a cover by Gil Kane/Al Milgrom.

Valiant Entertainment has done it again. They have sold out of a comic and are releasing a second print with the first print on the same day. A&A #1 will have quite the variant of choosing when Wednesday hits, but our fav’s are the Kano and Phil Jimenez covers.

After a bit of a wait, Clandestino #2 (Black Mask) will finally get fans back in the mood.
Rivers of London #1 (Titan Comics) one variant is sold out.
Steven Universe And The Crystal Gems #1 (Boom Studios) is sold out.