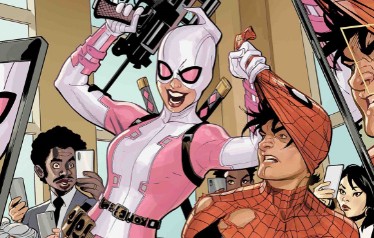 Absolute Carnage Scream #1 – With the release of the Absolute Carnage event comes an excessive amount of number one comics in line with the event. Here is Scream #1 with the original(?) She-Venom Patricia Robertson. The Scream character first appeared in Venom Lethal Protector #4 (1993). Cullen Bunn writes and Gerardo Sandoval pencils.
The Punisher: Kill Krew #1 – Is this a one shot? No matter, with Gerry Duggan (writer) and Juan Ferreyra (artist) at the helm, this is sure to be an instant classic one shot or series. The Mike Zeck classic cover itself sets the tone here.
Gwenpool Strikes Back #1 – Anyone remember how hot the Gwenpool character was at one time? What happened with that? If anyone could rekindle that fire it would be writer Leah Williams and artist David Baldeon.
Captain Marvel #9 –  Who’s star is rising? We know Carol Danvers’ star is falling. “A Star Rises, Another Falls” by Kelly Thompson and artist Carmen Nunez Camero. Changes are on the horizon for Carol Danvers/Captain Marvel. Sold out on the distributor level.
Once & Future #1 – Two names comic fans need to know regarding this comic. Kieron Gillen and Dan Mora. Nuff said. This BOOM Studios comic is just about sold out on the distributor level.