Here are this week’s top trending comic books and new items headed your way this Wednesday 6-13-18
This site is BEST VIEWED on Google Chrome.
Click on the RED links, Images or the comic cover to buy/bid from All available sellers on Ebay
Please note: New comic book releases and all items are subject to change

Gail Simone is killing it in the new Domino series. Was there ever a doubt really? Domino #3 features a super special guest star in it as the hard-hitting saga stomps onward. 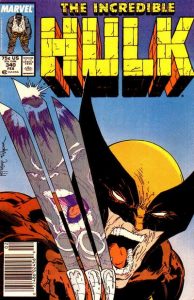 A new Deadpool comic from two amazing creators hits this week. Deadpool: Assassin #1 from Cullen Bunn and Mark Bagley. Look for this comic to trend among your favorite social media circles and reviewers.
The Hunt For Wolverine: The Adamantium Agenda #2 cover is the modern day Incredible Hulk #340 Todd McFarlane cover. Seriously awesome. Thanks to Greg Land. Beside the cover, lots going within the storyline inside. Look for this comic to appear all over your media feeds and podcasts.
Have to admit, the craze for Squirrel Girl never hit the old site (InvestComics) as much as many may have wanted her to. We just didn’t understand the exact connection with the character and the hype over a possible movie, which we never bought into. Now the first appearance of Squirrel Girl is way over market value and speculative websites or non-speculators want to keep that market where it’s at. A CGC 9.8 sold for $345 in early April. This is absurd. Monies well spent elsewhere, but once again, another reason InvestComics had to switch things up a bit years ago. We knew that Squirrel Girl hype was way overvalued and not going anywhere anytime soon. Either the market is way too early for this comic or it will die by the wayside with someone holding a useless $345 first appearance. With that all said, what to do with a character that doesn’t have as much traction as in previous years? Team her up for the first time with one of the hottest female Marvel characters right now, Ms. Marvel and bam you get an almost sold out comic. Marvel Rising Alpha #1. Brought to comic fans by the talented creative team of Devin Grayson and Marco Failla. The creative team here are the ones driving this comic.

Marvel combines the world of hip-hop and comics once again, but this time with more flare. The Weeknd will get his own comic book created character out of an album named Starboy. A brilliant way to mix the two cultures of music and comics. Starboy #1; writers Christos N. Gage, La Mar Taylor and The Weeknd, with artist Guru eFX. Expect Weeknd fans to jump on this comic as well, causing it to sell out very quick.
Writer Donny Cates is reaching back into time and telling a tale that resembles somewhat of an origin about the Venom symbiote. Make sure to be on board with this trending superstar writer Donny Cates and artist Ryan Stegman as everything unfolds in Venom #2.
Thor is back with another number one comic. Original numbering should really stay with these comics. Number one comics are so watered down with these restarts, but they sell because of the number ONE on it. Sell, Sell, Sell! Not crapping on the new series one bit, so no panties in a bunch okay? The new books will probably kick tons of as*. Thor #1 will be written by Jason Aaron and illustrated by Michael Del Mundo.
Marvel Two-In-One Annual #1; Chip Zdarsky and artist Declan Shalvey.

Hawkman is back in the DC Universe. The new Hawkman #1 will be brought to you by Robert Venditti and Bryan Hitch.
While writer Gail Simone works the Domino series to a fever pitch, she’ll debut a new series over on the other side of the tracks; Plastic Man #1. Art by Adriana Melo.
Who’s down for a good comic book fight? How about Batman: Prelude To The Wedding – Batgirl vs. The Riddler #1? That’s a long title, no? Who cares? Fight, fight, fight! Tim Seeley and Minkyu Jung.
Find out what happens after the dust settles upon the Scooby team losing their male lead (death of Freddie) in Scooby: Apocalypse #26.
A ‘bold new direction’ for the Titans will begin in Titans Special #1. Writer Dan Abnett and artist Paul Pelletier.